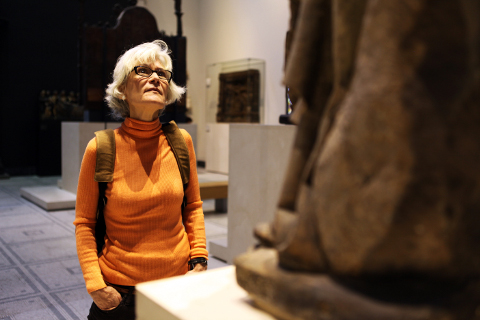 Born and raised in Albuquerque, New Mexico, a place I hope to return to someday. I attended Berkeley (BA in Comparative Literature, 1974) and Columbia Graduate School of Journalism (MS 1977 and am now taking a sabbatical year at the Courtauld Institute of Art (Graduate Diploma expected, June 2013).

Students reading this are undoubtedly wondering what happens after two years of graduate school at Berkeley. We hope that you get a job. Here’s how I got my first reporting gig: I boarded a Greyhound bus in New York with a navy blue cotton dress that didn’t wrinkle easily.

At each city along the southern route to Albuquerque – Charlotte, Atlanta, Raleigh and others – I called the editor of the local newspaper, informed him I had just graduated from Columbia and asked if I could drop by. The editors were all exceedingly kind and met with me. At the end of the trip I had one offer for an internship, some nibbles and a real job offer from the Albuquerque Tribune. I took it.

From there, I went to Esquire Magazine as a researcher and then the same position at Time Magazine. The only reason I left Esquire is that I could not afford to live on the $150 a week we earned. The position at Time got me to the LA Times business page, followed by The New York Times where I worked first on the business page and then abroad covering the war in El Salvador and the return of democracy in Argentina. For students reading this: I didn’t really feel I had mastered the craft until about five years into my career.