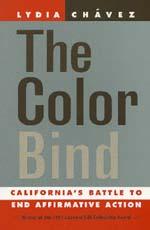 From Amazon: “The Color Bind tells the story of how Glynn Custred and Thomas Wood, two unknown academics, decided to write Proposition 209 in 1992 and thereby set in motion a series of events, far beyond their control, destined to transform the legal, political, and everyday meaning of civil rights for the next generation. Going behind the mass media coverage of the initiative, Lydia Chávez narrates the complex underlying motivations and maneuvering of the people, organizations, and political parties involved in the campaign to end affirmative action in California.

For the first time, the role of University of California regent Ward Connerly in the campaign–one largely assigned to public relations–is put into perspective. In the course of the book Chávez also provides a rare behind-the-scenes journalistic account of the complex and fascinating workings of the initiative process. Chávez recreates the post-election climate of 1994, when the California Civil Rights Initiative (CCRI) appeared to be the right-time, right-place vehicle for Governor Pete Wilson and other Republican presidential prospects. President Clinton and the state Democratic Party thought the CCRI would splinter the party and jeopardize the upcoming presidential election. The Republicans, who saw the CCRI as a “wedge issue” to use against the Democrats, found to their surprise that the initiative was much more divisive in their own party.

Updating her text to include the most current material, Chávez deftly delineates the interplay of competing interests around the CCRI, and explains why the opposition was unsuccessful in its strategy to fight the initiative. Her analysis probes the momentous–and national–implications of this state initiative in shaping the future of affirmative action in this country.” 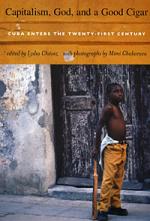 Capitalism, God, and a Good Cigar: Cuba Enters the Twenty-first Century (May 2005)

From Amazon: “When the Soviet Union dissolved, so did the easy credit, cheap oil, and subsidies it had provided to Cuba. The bottom fell out of the Cuban economy, and many expected that Castro’s revolution—the one that had inspired the Left throughout Latin America and elsewhere—would soon be gone as well. More than a decade later, the revolution lives on, albeit in a modified form. Following the collapse of Soviet communism, Castro legalized the dollar, opened the island to tourism, and allowed foreign investment, small-scale private enterprise, and remittances from exiles in Miami. Capitalism, God, and a Good Cigar describes what the changes implemented since the early 1990s have meant for ordinary Cubans: hotel workers, teachers, priests, factory workers, rap artists, writers, homemakers, and others.

Based on reporting by journalists, writers, and documentary filmmakers since 2001, each of the essays collected here covers a particular dimension of contemporary Cuban society, revealing what it is like to have lived, for more than a decade, suspended between communism and capitalism. There are pieces on hip hop musicians, fiction writing and censorship, the state of ballet and the performing arts, and the role of computers and the Internet. Other essays address the shrinking yet still sizeable numbers of true believers in the promise of socialist revolution, the legendary cigar industry, the changing state of religion, the significance of the recent influx of money and people from Spain, and the tensions between recent Cuban emigrants and previous generations of exiles. Including more than seventy striking documentary photographs of Cuba’s people, countryside, and city streets, this richly illustrated collection offers keen, even-handed insights into the abundant ironies of life in Cuba today.